We present a column from our archives published in July 2014. Members enjoy access to all archived content, including thousands of PDFs and hundreds of Ebooks – all free! To join: make a $25 (or more) tax deductible donation to ChessEdu.org and we will send your log in details for one-year access.

I Think I Understand More of the Game

“It might sound a bit strange, but I think that my understanding of the game of chess is still growing, although I don’t play Candidates-level chess anymore. Even for myself, that is a strange experience. Of course, I am no challenger for the world title anymore, but I do have the feeling that my play is more interesting than at the time I played for the world championship. I do not really follow closely the theoretical developments of today, but nowadays I have more and better ideas.”

Viktor Kortchnoi and I talked in Antwerp during the Lost Boys tournament, where he finished second behind Dutch GM Paul van der Sterren. We had met last a couple of weeks before in Dortmund, where he succeeded in beating former arch-rival Anatoly Karpov for the first time in thirteen years (after the World Championship match in Merano, 1981).

That win against Karpov must have been quite satisfying.

Of course. And it really was some game. At a certain moment, there were three queens on the board, two of Karpov’s and one of mine. I have been in that situation before. That was, if my memory serves me well, in the Stockholm Interzonal in 1962 against German from Brazil. That game was adjourned. I was the side with the two queens. During the analysis, I discovered something very remarkable: the board is simply too small for two queens of the same color. They only get in each other’s way. I realize that this might sound stupid, but I fully mean it. The advantage is much less than one would expect by counting material. Karpov obviously didn’t know that and that turned out to be fatal for him. But there were other circumstances that played a role of importance. He had just played the tournament in Linares and that must have cost him a lot of energy. It was an overwhelming success for him, but I know what kind of energy it costs to complete a tournament like that without relaxing a single moment.

Well, come on, what is this? I almost can’t believe my ears: Kortchnoi looking for excuses for Karpov? I know that the two of you are more or less on speaking terms again, but this is something different.

Something changed in the course of time. In the past, I used to fight not only Karpov, but a whole system, the whole Soviet Union. Karpov will never become a real friend of mine, but by now we are wise enough to develop a kind of, let’s say, diplomatic relationship. I still do not understand him completely, but okay, everybody has his own weaknesses.

Take, for instance, last year. He had to play the match for the FIDE World Championship against Jan Timman and at that time he gave some interviews. He was talking about “my sister” Caissa and things like that. Well, in my whole life I have never read so much nonsense, really, but it doesn’t worry me so much anymore. Karpov has never been a completely honest man, but one can learn to accept that. One gets older and milder, which isn’t meant to say that I accept everything that he has done to me. Do you know that my match against Karpov in Merano 1981 was fully prearranged at the highest political level in the Soviet Union? This can be testified to by official documents of the KGB, the secret police of the Soviet Union. I would love to see those documents published. 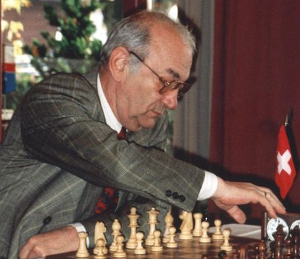 Okay, you are on speaking terms with Karpov again. How is your relationship with Kasparov?

In a way it is very much the same, but Kasparov has a different set of tricks. You know what happened in his game against Judit Polgar in Linares? After his move he realized that it was a blunder and quickly did another move with the same piece, saying that he hadn’t released the piece. This behavior is unworthy for a player of his standard. In fact, the rules have to be adjusted, especially those concerning the role of the arbiters.

Sometimes they don’t see anything at all, but if they do, they don’t take action because of the reputation of the player involved. That is a shame, but it doesn’t have to be a problem. Nowadays there is so much electronic equipment at the big tournaments. Just register all games by camera and the problem is solved. Recently there have been too many incidents – in Monaco, Linares, etc. Conditions have to be adjusted in such a way that arbiters can take action, if necessary backed by video images.

What is your opinion on the new generation? What do you think of the FIDE Candidate Matches in India?

I have not yet seen all the games, but I think that it was quite normal that Valery Salov eliminated Jan Timman. In most of the games Salov had the initiative and I regard him as the stronger player of the two at the moment. That result was no surprise for me.

The result of Gelfand-Kramnik (4½-3½), on the contrary, was indeed a surprise. I am very much attracted to Gelfand’s style and sometimes I try to imitate him myself, but Kramnik is definitely the more talented player. His problem is that he sometimes gives opportunities to his opponent and that you cannot do against a player like Gelfand. In Monaco, during the Melody Amber III tournament, Kramnik very much impressed me. He has made fantastic progress in the last two years, but he has not yet taken the time to evaluate everything.

I know that situation. When I played in the championship of the Soviet Union for the first time, I finished second. Everything went well. I learned a lot, but when I participated for the second time, it turned out that I had not worked out all my impressions well and I finished second to last! You need to give yourself the time to get everything in the right order, to contemplate and learn the lessons from your experience and if you don’t do that, you make no progress. I have the feeling that that is exactly what happened to Kramnik.

The big surprise was Kamsky’s win against Anand. In India.

We don’t have to talk about Anand’s talent. It is obvious. But he lacks some fighting spirit. Sometimes he is just too soft and that is killing at that level. I was very much surprised by what happened in that match. He was two points up and still didn’t win the match. He gave Kamsky the opportunity to fight back and then lost the rapid games in a rather silly way, but I still have to take a close look at the games. I recently had some holidays, you see.

Who is going to be the new FIDE World Champion?

Don’t ask me. The past has proven that I am a bad prophet. Most of my predictions are wrong. I predicted Timman, Anand, and Kramnik as the winners of the Sanghi Nagar matches.

And now Karpov is joining the club of the three winners.

Karpov is always dangerous. I don’t see that he is still making progress in his play, but never forget that he is a real sportsman. If there is still a small chance to fight, he will do so.