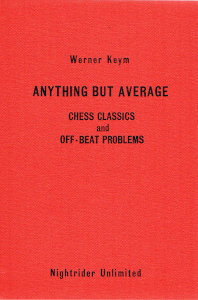 Werner Keym is a German expert in chess problems showing castling, en passant capture, and pawn promotion. For years problem-lovers have enjoyed his computer-defying puzzles, his funny chess jokes and his stories in the tradition of Sam Loyd.

Here is how Anything but Average is described on the publishers website:

“The total of 400 games, endgame studies and problems should address the entire spectrum of chess aficionados – OTB players of all shades and problem enthusiasts alike. There are altogether 630 diagrams, thereof a large part of auxiliary diagrams complementing the profound explanations.

“Immortal games and unforgettable combinations, famous endgame studies, classical problems of all genres up to the top compositions highlighted as ‘Millennium problems’ (now allocated to the corresponding genres) are explained, preferably with a minimum of the mostly disliked problem jargon. So you will also encounter plenty of the big names of the chess world, past and present.”

Keym writes of this second edition, “I have modified the structure of my book and added forty problems. It is a delightful anthology of 400 chess games, combinations, endgame studies, problems, puzzles, riddles. Immortal games by Anderssen, Lasker, Fischer, Kasparov, Shirov, Carlsen and famous studies by Barbier, Saavedra, Troitzky, Réti, Pervakov and classical problems of all kinds as well as top compositions (selected as ‘Millennium problems’ by 38 experts in 2000) are presented and explained with additional diagrams, moreover compositions with asymmetry, castling, pawn promotion.”

Moreover, there are an additional 140 problems referenced throughout the text by their Schwalbe PDB (Chess Problem Database Server) numbers that may be readily looked up independently be the reader. As can be seen in the following example from the section on Two-movers:

No. 53: Black is in a stalemate position. Which white piece will give a flight square to Black? There are four possible moves of the queen, six of the rook c3 and seven of the rook d2. The only successful move is 1.Rc8! By it “a line of attack is cleared when the obtrusive mass of a piece is moved away over the intersection point in the same direction as the piece which is to follow it” (Grasemann): 1.Rc8! (clearing the mating line c7-g3 for the queen) 1…Kxg3 2.Qc7#. “Typical of this clearance is that the key rook is idle in the mate. But that is the great thing about it, the really exciting idea” (Grasemann). This form of clearance is called ‘Bristol clearance’ because its first realization (=P1036903) won the 1st prize in the Bristol Tourney 1861.

To find the referenced problem, you would visit the Chess Problem Database Server and type in the search expression for the unique problem ID; i.e., PROBID=’P1036903′. This would return a result, after 1,718 milliseconds, of Frank Healey’s prize winning problem.

As can be seen from the above example, many chess problems are excellent resources in a classroom setting. Here is another from the same section:

Mate in 2
How many solutions?

No. 55: A two-mover with only four pieces, this seems to be very easy. Are you a good solver who will find all the solutions? Please try.

Be honest. Have you really found five solutions.

Let’s look at one last problem from the Proof games section by the author himself. Note that while the text throughout the book uses English algebraic notation for the pieces, it reverts to German algebraic to denote knight moves:

“Since 1980 proof games (PG) have generally ranked in retro columns. Their seemingly inexhaustible themes and tasks are fascinating for composers and solvers. You will find thousands of them in PDB (K=‘unique proof game’). Unique or unambiguous means that the whole sequence of moves is running without any dual.”

However, we did notice that of the nine proof games presented in Anything but Average, eight are reproduced from his previous volume Chess Problems Out of the Box. A spot check revealed similar repetitions in the section “Castling gala.” A problem by Roth in the Retractors section appeared in the Rotations section of the previous volume. We are not going to extensively compare the two books content, but this is an unfortunate and unnecessary duplication of material that will give the reader pause about owning both volumes together.

Anything but Average, as with it’s similarly comprised predecessor Chess Problems Out of the Box, is a joy to dip into again and again and discover (or rediscover in some cases) these gems of chess creativity. As the author notes, “Anything but Average prefers to entertain, rather than teach.” And it is “aimed at all chess lovers: players and problemists.” Even if you do not consider yourself a fan of chess problems, Keym will win you over with ingenious key moves and fascinating paradoxical continuations. The book is suitable for all levels of chess aficionados from beginners to grandmasters.

Not a Member Yet?

To read this content you will need to become a member. To do this, please fill out the form in the sidebar or click here to Become a Member.