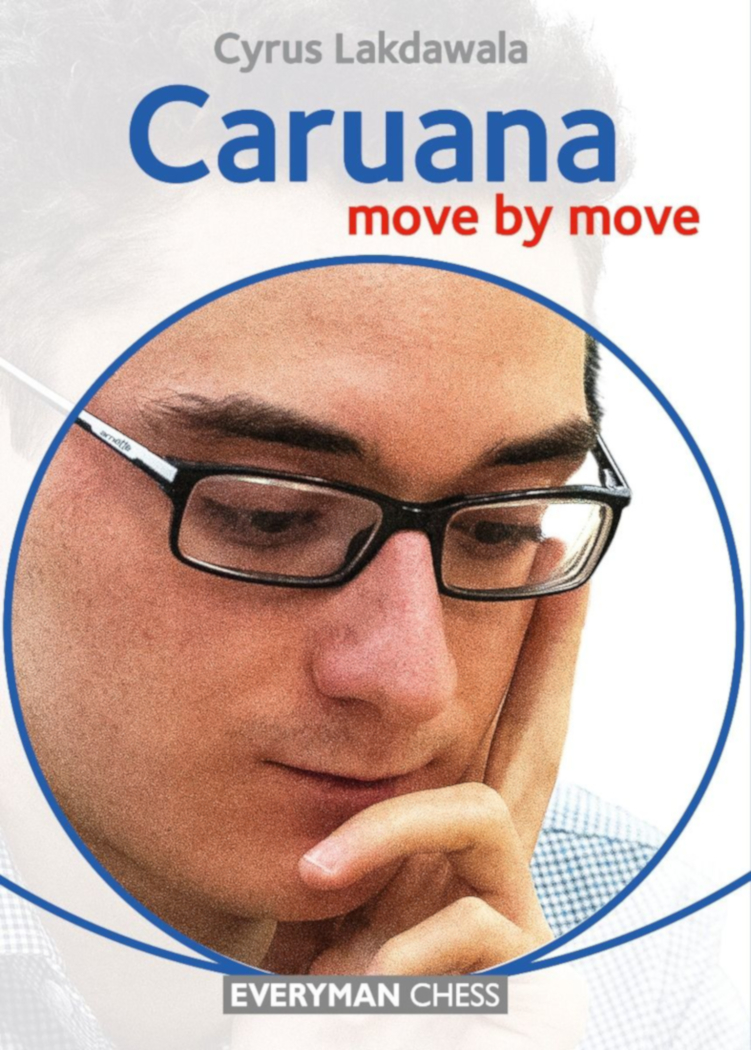 Cyrus Lakdawala is an international master, a former National Open and American Open Champion, and a six-time State Champion. He has been teaching chess for more than thirty years, and coaches some of the top junior players in the United States.

Here is how Caruana: Move by Move is described on the back cover:

“Italian-American grandmaster Fabiano Caruana is the perfect role model for any aspiring player. Already a very strong grandmaster, he announced his presence as a leading contender for the world title in 2014 when he scored an incredible 8½/10 (including seven straight wins from the first seven games) in the Sinquefield Cup in St Louis. This was an elite event where he finished an astonishing three points clear of Magnus Carlsen, whom he will challenge for the world title in late 2018. Caruana earned this right thanks to his fine victory in the Berlin Candidates where he scored 9/13 and finished a point clear of a world class field.

“Caruana’s style is universal. He is a very dangerous attacking player who is also equally at home in quiet strategic positions or manoeuvring in an endgame. In this respect he is the epitome of the modern grandmaster, being a hard-working and determined fighter who prepares thoroughly and plays with great determination and accuracy.

“The Move by Move series provides an ideal format for the keen chessplayer to improve their game. While reading you are continually challenged to answer probing questions – a method that greatly encourages the learning and practising of vital skills just as much as the traditional assimilation of chess knowledge. Carefully selected questions and answers are designed to keep you actively involved and allow you to monitor your progress as you learn. This is an excellent way to study chess while providing the best possible chance to retain what has been learnt.”

There is also an index of openings and an index of the sixty-two games. The most represented opening is the Ruy Lopez at ten games, followed by the Sicilian and French each with seven. Next come the English, Petroff, and Slav all with four. There are fifty-one complete games and eleven endings. All the games but one are wins for Caruana, with one draw against Carlsen also included. Caruana had Black in seventeen of the games.

This is at least Cyrus Lakdawala’s thirtieth book for Everyman chess, and when you consider that he is also writing for other publishers, he must be the most prolific chess author of the moment if not all time. Unfortunately, his writing style is characterized by stream-of-consciousness incessant meaningless blather. He is clearly the top candidate for the Bulwer Lytton award in chess writing.

As an example lets look at his introductory sentence to chapter three, “Caruana on the Dynamic Element.” He writes, “This is the chapter where the now dead Obi-Wan Kenobi telepresents himself from the spirit realm and advises Luke Skywalker to use the force.” Or consider the following howler from the game Caruana-Carlsen, Karlsruhe 2018:

After the moves 1 d4 Nf6 2 c4 g6 3 Nf3 Bg7 4 e3!?, we have a diagram and a question: “Why would Caruana play an opening line this meek when he has a naturally aggressive style.” The answer begins, “His last move does clearly veer from his normally aggressive disposition. When we play an opening line which fails to suit our natural style, we become the battered spouse who threatens to leave the relationship, but never does.” There you have it. Cyrus Lakdawala: nothing says lighthearted fun like spousal abuse.

The good news is that there is less of this than usual in Caruana: Move by Move. Perhaps Lakdawala is finally running out of things to say, but this book is the better for it. The book begins with a brief biography of Caruana’s chess career in which Lakdawala likens him to an improved version of Mikhail Botvinnik: “Botvinnik 2.0.”

He writes, “Caruana is one of those rare players blessed with the ability to switch from a slow positional build-up to irrational tactics, without loss of efficiency in either mode. He is combative, a high risk taker, in every stage of the game, yet almost always from a strategic vantage point. In this book, we find many examples of speculative pawn sacrifices for vague compensation. He also seems to delight in playing positions with opposite castling, relishing the opposing wing attack war. Caruana’s opening preparation is the last word in sophistication. He is supremely prepared in this phase of the game and, along with Kramnik, is perhaps the best prepared player in the world.” He concludes, “Caruana [sic] unique super-aggressive/strategic style makes him a modern day youthful Botvinnik.”

Lakdawala also likens Carlsen to Capablanca and writes, “Caruana’s Botvinnikian logic matches Carlsen’s effortless Capablanca insight in clear positions.” Most of the introduction is a cogent assessment of the combatants skills in the upcoming Carlsen-Caruana world championship match set to begin November 8, 2018. In the end, Lakdawala slightly favors Carlsen.

Let’s look at an excerpt from chapter two, “Caruana on Defence and Counterattack”:

As mentioned in a previous game, Caruana could do no wrong at the 2014 Sinquefield Cup. Here he takes out the world champion with the black pieces.

Carlsen may be anxious to dodge a theoretical fight with the scariest openings expert in the world. I advocate the ancient Bishop’s Opening, the excavated Mastodon, in my book Opening Repertoire: 1 e4. It cuts down heavily on theory when compared to the Ruy Lopez and has the added benefit of eliminating the need to study Petroff’s Defence. Carlsen actually beat Caruana in their rematch with this line in 2018.

Black can play any number of ways. This move is by far the most popular response to the Bishop’s Opening.

3 Nc3!? is the Vienna version, which allows the now somewhat defanged Frankenstein/Dracula variation, running 3…Nxe4 4 Qh5 Nd6 5 Bb3 Nc6?! (objectively, this gambit is unsound, which doesn’t stop club players from bashing it out; 5…Be7 is the safer and sounder alternative) 6 Nb5! (threatening to destroy the defender of f7) 6…g6 7 Qf3 f5 8 Qd5 Qe7 9 Nxc7+ Kd8 10 Nxa8 b6 and the comps tell us that White is borderline winning, while we foolish humans love to play Black, who does have a dangerous initiative for the sacrificed material.

Straightforward play. Black wants to gain a tempo with …d7-d5.

Answer: It does, yet the point behind it is that White will be denied Nc3, which takes the pressure off Black’s d5-pawn.

White has full compensation for the pawn with:

Now d5 is under threat.

Caruana takes the simple and, to my mind, correct route and plays for equality, which he duly attains.

Maintaining the tension with 7…Be6 is objectively worse since Carlsen would respond 8 d4! with complications probably slightly favourable to White.

Carlsen foments strife by goading his opponent into winning his e4-pawn at a strategic cost.

1) A development lead in an open position.
2) The very loose black structure.
3) The open h-file.
4) A very exposed black king.

Caruana: Move by Move is an enjoyable collection of Caruana’s top games. It is well-timed to prime the readers excitement for the upcoming world championship match. When Lakdawala sticks to writing about pertinent elements of the game, he is worth reading.

The ebook works wonderfully in the free Everyman Chess Viewer app, and makes it convenient and easy to play through the games. The app comes with a built-in chess engine, but it will not let you enter sideline variations on your own. Chess Viewer eBooks are compatible with Apple and Android products, as well as with any PGN software. Each eBook comes with a ChessBase and PGN file that can be added to your device of choice.