The other day I was playing chess on the Internet. I have noticed that frequently, upon gaining victory in a fair contest, my opponent sent me a short message, stating that I was just lucky and in fact do not possess the slightest understanding of chess. To be honest, blaming my own losses on external factors, such as luck or destiny, also crossed my mind, whenever I have failed.

I wondered whether my friend, the great Baron Munchausen, had encountered similar phenomena.

“Of course I have” – he said – “and whenever I am blamed with being ‘just lucky’, I make a special effort to teach my rival a lesson”.

He quickly arranged the pieces on the board, to show a memorable such occasion.

“I was pleased with myself” – the Baron recounted – “but surprisingly, my opponent exclaimed ‘Well, you were just lucky'”.

“I became upset” – said M. and frowned while recollecting his rival’s behavior: “if you like, I can demonstrate victory by other means” – I told him.

The position was retracted and Munchausen unleashed 1.Be7!!

Mr. Bad Loser was not convinced. “You rely on tricks. Any other move besides 2.Qh8+ is futile”.

The Baron shrugged and took back his last move. Instead, he played 2.Rf8+ Rxf8 3.Qh8+

“Was Mr. Bad Loser convinced now?” – I asked my friend.

It transpired that he was not.

“My enemy declared:” ‘this is just a transposition of moves; I say, were it not for the Qh8+ device, you had nothing to show’. He went on to argue that my h6-pawn had randomly advanced to this square with no malice goals, that I should have lost 15 moves ago, etc.”

“This must have made you very angry” – I assumed.

“You bet” – replied Munchausen. “Soon I found yet another manner to destroy him:”

To win a game is a feat that many are capable of; but to win it over and over again… you need to be the Baron!

You’d think that by now Mr. Bad Loser would give up and admit Munchausen’s superiority. Imagine this; you are given a demonstration of wins by so many different ways! But according to M., his adversary just mumbled “tricks, cheap tactical tricks. You are a lucky fellow, that’s all.”

“Well, there remained one, ultimate path left” – the Baron sighed.

I could have thought of several paths: the rude response, the murderous way, the magical method… but Munchausen opted for the polite route.

“I said ‘you are right, I am just lucky’, got up from my chair and thus put an end to this silly argument.”

(The starting position is a modification of a position that emerged in the game Doron Limor (Moritz) – Yaacov Bleiman, Israel ch. 1972.) 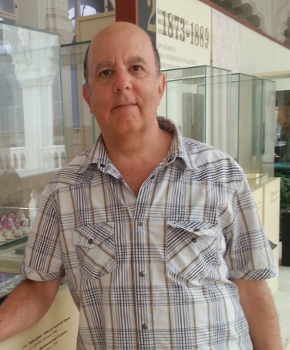 Amatzia Avni is an Israeli psychologist, inactive player, and study composer (holds FM in both areas). He regards “The Amazing Chess Adventures of Baron Munchausen” (Mongoose Press, 2011), based on his articles in “Chess Monthly”, as his best work. Fide’s “chess in school” translated three of the book’s episodes to nine languages. The present episode is a fresh one.

Download The Skittles Room in PDF format. All previous columns are available in the ChessCafe.com Archives.

The ChessCafe.com Skittles Room is open to reader contributions. If you have an article for publication, write to us via our contact page. If we publish your article, we will send you a free Inside Chess 1988-2000 DVD, or provide one-year free access to ChessCafe.com!

Chess Endgames for Kids
Save 25%!!