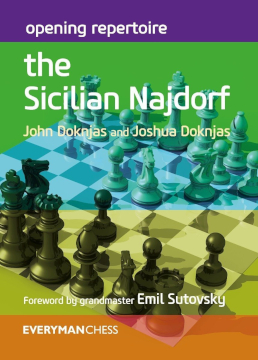 The Sicilian Najdorf is a chess opening with an awesome and terrifying reputation. To create a book that covers the theory-heavy favorite choice of aggressive and sharp players like Bobby Fischer and Garry Kasparov is no trivial task. As someone that does not regularly play the Sicilian, even approaching this book for a review seemed daunting. However, the Doknjas brothers were up to the task and delivered a very readable and useful book that does the Najdorf justice. Indeed, I have started playing the opening myself and have not only enjoyed decent results, but had many enjoyable positions.

The Doknjas brothers are a pair of strong players (an FM and NM from Canada) that boast a resume of chess teaching, although this appears to be their first book. Although they don’t feature their own games in the book, online databases show that they do employ the Najdorf with success.

The back cover provides an apt description of the book, a true testimonial to its quality:

“The Najdorf is a very rare thing – an opening for Black that is highly aggressive but is also recognized as being objectively sound. In this book, FIDE Master John Doknjas and NM Joshua Doknjas navigate through the main lines of the Najdorf and provide the reader with well-researched, fresh, and innovative analysis. Each annotated game contains instructive commentary on typical middle-game plans. With thorough variations and explanations on pawn structures and piece placement, this book provides insight to both strong masters and less experienced players alike.”

Almost every game in the book is from this decade, with fifteen as recent as the past three years. The table of contents is followed by a note about the authors, a short but high-quality bibliography, and a foreword by GM Emil Sutovsky. The coverage of the lines is organized as follows:

So how do the authors manage the complex theory of the Najdorf? The format of the book is fairly standard for the Everyman Chess Opening Repertoire Series: complete games are annotated, with frequent call-outs that highlight particular points or tactical motifs. The annotations are at times dense – I would have expected nothing less considering the opening. A quick comparison of the number of games and the number of pages in each chapter should give you an idea of the level of detail devoted to each game.

Question: What is White trying to accomplish with this move?

Answer: He wants to reinforce his e-pawn and possibly plans a rook lift (Re3 and then Rg3 or Rh3 after the queen gets out of the way). 11.Rhe1 is also a useful waiting move.

White has some alternatives here:

[Another diagram is given, even though only one additional move has been played. – DC]

Question: What is the point of this move?

Answer: 11…Bb7 is not at all the most popular move, but we believe it is the best. Black’s idea is to play …Nc6 and take back with the bishop (not the queen) if White chooses to play Nxc6. One of the points of doing this is that if White eventually wins the d6-pawn with Rxd6, he will not do so with tempo. Also, by leaving the queen on b6, Black is able to play ….Qxf2 in some lines.

The above game continues over another seven pages to conclude in a draw at move 53. As you can see, the authors do not shy away from sharp positions, but make rational choices about their repertoire and explain them in very clear terms. This is also evident in their choice against 6.Bg5 – they opt for 6…Nbd7, avoiding the extremely sharp and theory heavy Poison Pawn system.

This book should appeal to a wide range of chess players and fans of the Sicilian. Understanding a rich mainline opening like the Najdorf can be important for general chess improvement, and can be a formidable weapon even at the elite level. It is no surprise that this opening has been the choice of many great chess players, and this book makes it accessible to club players – cursory reading of the variations and the main ideas is likely to be useful for players 1600-2000, and stronger players should benefit from careful reading of the variations and incorporation of these ideas into their repertoire. Thanks to this book, I’m likely going to be playing 1…c5 at my next tournament.