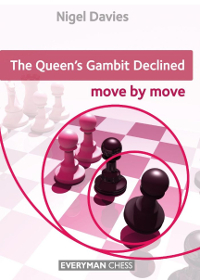 Nigel Davies is an international grandmaster, the author of many books and DVDs, a former contributor at ChessCafe.com, and an experienced chess coach. The book is also available in the following formats: CBV, PGN, Kindle, and Epub for $21.95.

The book is described as follows:

“The Queen’s Gambit Declined is one of the central pillars of chess opening theory. Virtually every world champion has played the opening with both the white and black pieces and it is a great favourite at all levels in chess. The reason for its enduring popularity is that it is rich in the classic strategic themes. Either side can end up with an isolated d-pawn, White can pursue a queenside initiative while Black counters on the other wing or White can attempt to build a powerful centre that Black hopes to undermine.

“The Move by Move series provides an ideal format for the keen chessplayer to improve their game. While reading you are continually challenged to answer probing questions – a method that greatly encourages the learning and practising of vital skills just as much as the traditional assimilation of chess knowledge. Carefully selected questions and answers are designed to keep you actively involved and allow you to monitor your progress as you learn. This is an excellent way to study chess while providing the best possible chance to retain what has been learnt.”

The beginning moves of the Queen’s Gambit Declined are normally 1 d4 d5 2 c4 e6. Though transpositions are plentiful and play can begin with 1 Nf3 or 1 c4. Davies calls this “the first great advantage of playing the QGD as Black” since “it provides the basis of a defence to flank openings as well as 1 d4.”

The main contents are divided as follows:

Davies mentions that he has used the QGD in his own games, but only includes one of his own games in the book: a loss on the white side against Lputian from 2003. He writes that it was as a coach that he “really learned to appreciate its value” as a solid opening that “is relatively immune to both the changing tides of opening theory and computer analysis.” He notes that “the greatest advantage for improving players is in its didactic value: it is a superb vehicle for teaching positional play because of the clarity of plans and pawn play.”

Given that the first four games are wins for White, the fifth a draw, and the sixth a win for Black on time from a worse position, I began to wonder as to which side this book was written. Yet of the seventy-two complete games, eight are wins for White; nineteen are drawn; and forty-five are wins for Black. So the focus is primarily from Black’s point of view; though, when playing White, Davies recommends “a simple and economical approach in capturing on d5 at the earliest opportunity.”

Davies also recommends “the simplest and most economical way” for Black to play is “by aiming to develop with …Nf6, …Be7 and (usually) …Nbd7 against all White’s possible systems.” He further examines “how particular finesses can be used to improve Black’s chances against particular systems.” He notes that the best way to learn an opening is to “master a few set-ups and then expand these gradually” as experience is gained.

Let’s look at an example of what to expect:

Capturing on d5 at this stage is a sensible and practical option for White, not least because it avoids sharp lines such as 4 Nc3 dxc4, not to mention the Semi-Tarrasch with 4…c5 and others. Black has some extra options because of this early capture, which we will explore here and in the next couple of games. Yet at club level it has been very noticeable to me that Black usually carries on his usual plan of development with …Be7 and …Nbd7.

There are actually some subtle differences between this move and 6 Qc2!, and in the position after 5…c6 I do think the queen move is more accurate. On the other hand, I suggest that White meets 5…Be7 with 6 Bg5 rather than 6 Qc2.

Black should play 6…Bf5! in this situation, as he doesn’t even need to prepare the bishop move with …g7-g6. This is why White should prefer 6 Qc2 over 6 Bg5.

Now this is necessary if Black wants to put his bishop on f5.

Answer: Yes, it does, though White’s main plan to exploit this weakness is to castle queenside and shove his h-pawn up the board. So Black might be careful not to castle kingside before White is also committed to doing so.

This looks obvious, but it’s not White’s only move. In the next two games we will examine 8 Bxf6!? and 8 e4, respectively.

This and White’s next move constitute an interesting plan to play in the centre and possibly activate his central pawn majority with a later f2-f3 and e3-e4.

I actually anticipated that I would dislike this book. I thought that the explanations would be brief and unenlightening, while there would be a slew of stem game variations quoted ad infinitum. Yet, Davies won me over with his lucid explanations that explain the positions in an easily understandable manner. I wholeheartedly recommend The Queen’s Gambit Declined: Move by Move for players of any level.