“Imagine a chessboard that can think, make its own moves, and play against you. It’s also App connected, which means, you can challenge anyone around the world. Their moves, right on your board.” The Square Off chess set is billed as the first telerobotic chessboard. It is the innovation of a company called Infivention who say they want to “add a little magic to the everyday lives of people, through our creations. We are bringing together Telerobotics and AI to build machines that feel more human than mechanical…” Their motto is “we create robots that move you.” 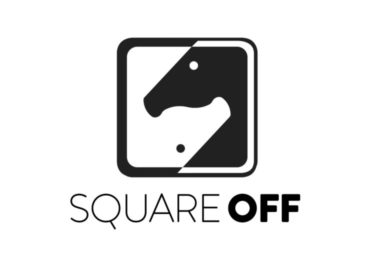 The concept for the Square Off board began in 2013 as a product designed to help the visually impaired enjoy a game of chess. Infivention was then founded in September 2015 by Bhavya Gohil and Aatur Mehta. Headquartered in Mumbai, India, it launched a Kickstarter crowdfunding campaign in 2016 – which was fully funded in just six hours! It also enjoyed success with a crowdfunding campaign with Indiegogo in 2017. Square Off gained further recognition by winning the following awards: Winner, Top Tech, CES 2017; Innovation Award, CES 2018; and Innovative product, Indiegogo 2018.

Square Off likens itself to a modern-day mechanical Turk. The boards are powered by advanced robotics and feature automated piece movement. While the concept of a self-moving chess board may not be new, Square Off combines this with an app that allows you to globally connect with friends in real time, or to stream games from live events, or to play against an AI chess engine. The Square Off companion app is available free for iOS and Android smart phones. 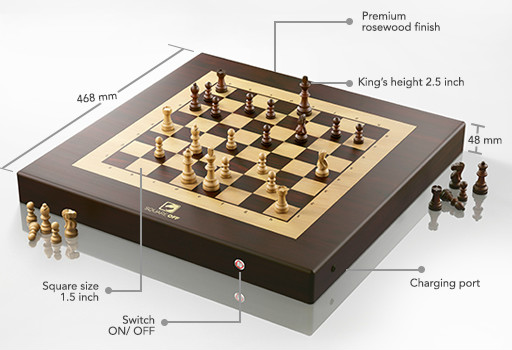 To play with friends, Square Off connects you with more than 10,000 other users in more than seventy countries, or allows you to connect with the twenty-three million users at Chess.com. To play against another Square Off user, you can direct challenge an online opponent, post an open challenge, or launch a random challenge. The random challenge also allows you to include Chess.com users and specify a rating range. You can set a chess date for a future game and video conference during the games with other Square Off users as well. All options allow you to set the time limit for the game, and the time that the Square Off board uses to move the pieces is not counted against you when playing against another Square Off user or the AI. If you are playing on Chess.com, the clock starts as soon as your opponent moves. Nevertheless, with a time limit of, say, 15 minutes per game, plus 10 seconds per move, the move delay is not an issue, and you can still play a relatively deep game. Users are assigned ratings based on their playing history. You have to play ten games against other Square Off users to be ranked publicly, though it is not stated what rating system is used to determine standings.

You can stream games from live chess tournaments and matches via the Square Off app in real time or after-the-fact. And the games are even more up-to-date than the Chessbase app. Moreover, the deluxe Grand Kingdom Set lets you live-stream and replay right on your Square Off board, where it will make the moves for you. You can also analyze games that you play or stream. Square Off outsources this task to the Analyze This app, which you need to install to utilize this function. Square Off thus piggybacks on the functionality of Analyze This, where you can also export games in PGN format to import into a database. However, the process to analyze is somewhat awkward. There is no analysis icon to press from the streaming screen. You have to press the stop button, confirm that you want to stop streaming, and then the option will launch to send the game for analysis. 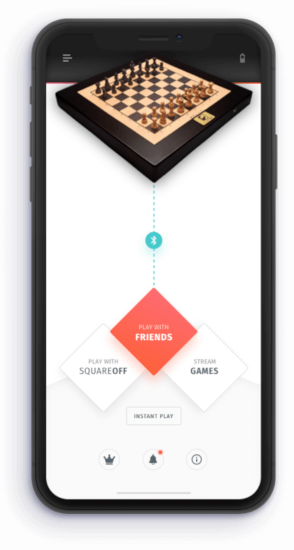 The AI app uses the Stockfish 10 chess engine (as does Analyze This). There are twenty playing levels from which to choose. At level 1, it plays at a beginner level and is easy to beat; at level 12, it can play a competitive game against fairly strong opposition; and at level 20, it can challenge super-grandmasters. You can also play against the AI via the app independently of the Square Off board.

The ELO rating range of the app corresponds as follows:

The Square Off chessboard comes in three different versions: the Kingdom Set, the Grand Kingdom Set, and the Limited Black Edition. The latter is the ebonized version of the Grand Kindom Set and is currently sold out. Each board features a 1.5 inch square size and a set with a 2.5 inch king. The pieces are boxwood and a luxurious dark rosewood with red felted bottoms. The set conforms to a German Knight Staunton pattern. However, some of their videos show a Zagreb-style pattern, and this would have been my preference if the choice were still available. The accessories that come with the board are a charging cord, a phone stand, and a pair of extra queens. With regards to pawn promotion, the mobile app screen will change and let you select the piece to which you want to promote. There is a battery indicator light in the Square Off app. If the battery dies during play, you need to plug in the charger. If you are playing against the AI, you will have the option to continue the game. However, if you are playing against a human player, then it cannot be continued. 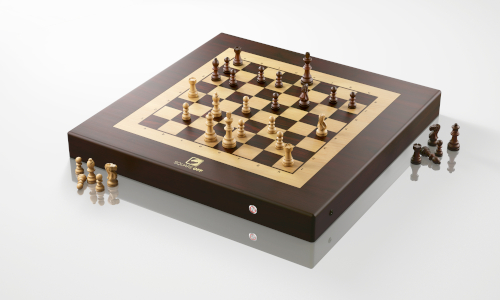 The Kingdom Set measures 19x19x2. It features a handcrafted rosewood finish board, and boxwood and rosewood pieces. It has a battery life that lasts up to fifteen games. 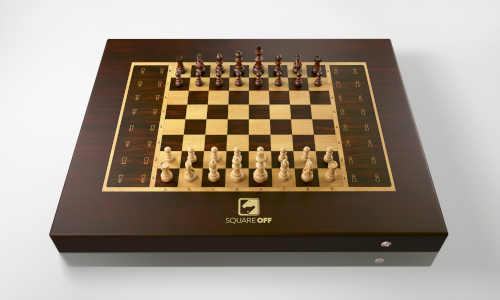 The Grand Kingdom Set measures 24x19x2. This larger rectangular board has two additional panels on each side that provides a designated place for each captured piece. It also features a handcrafted rosewood finish board, and boxwood and rosewood pieces. It has a battery life that lasts up to thirty games. It will automatically reset pieces to their starting position after each game and allows the user to live-stream chess matches right on the board.

Square Off boards purchased at the Square Off store come with a limited one-year warranty starting from the date of delivery. The warranty covers product defects caused by workmanship or materials. Any repair and replacement service covered by warranty, along with shipping and handling, will be free within this period. You can also return your Square Off up to fifteen days from the date of delivery, and it comes with a seven-day free trial period in which they offer free return and a full refund.

The developers seem genuinely interested in user feedback for future improvements. I would like to see the following features incorporated into the app: a partnership with the Lichess playing site; the ability to delete games played; as well the ability to hide games from public view and keep them private. The ability to flip the board in the app when replaying or streaming games to see the pieces from the black side, and the ability to pause games during replay. Also, the default listing of online opponents is alphabetical; it would be useful if this could be sorted by other criteria, such as rating. The noises that represent game moves and captures could be more natural sounding. It would be nice to have the option to choose sounds in the settings.

The Square Off board is exquisitely crafted, very intuitive to set up via the app, and easy to use. The motor is quiet and quick to move the pieces. It does not come with detailed instructions for getting started, but the Square Off website is full of helpful videos, and these can be accessed from within the app as well. It is great to be playing over-the-board chess in real time at one’s leisure, rather than looking at a flat computer screen. Square Off is a beautiful product and would be a fantastic gift for anyone! This is an heirloom quality item that you will be proud to display in your home.

Be sure to take advantage of their twin-pack deal, and save an extra 20% off any order using the discount code CHESSCAFE.

The Kingdom Set is available for purchase at $389, or book a twin pack at $622.
Save 20% with coupon code CHESSCAFE

Square Off has also just launched a Kickstarter campaign for a new line of products. The campaign ends November 21.