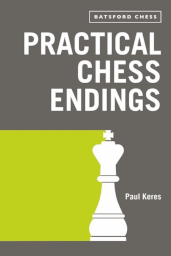 Estonian grandmaster Paul Keres (1916-1975) is widely considered to be one of the strongest players to never win the world championship. He was among the world’s top players from the mid-1930s to the mid-1960s and runner-up in the Candidates’ Tournament on four consecutive occasions.

Here is how Practical Chess Endings is described on the publishers website:

“It is difficult to overestimate the importance of good endgame play—and rather than trying to cover every theoretical possibility, grand master Paul Keres looks in close detail at fewer, but carefully chosen, examples. He explains the fundamental principles and main ideas, giving players—even the great ones—the practical help they need to figure out the best moves for themselves. Keres concentrates on frequently occurring basic positions, going through elementary endings, like king and queen against king, as well as a wide range of pawn, queen, rook, bishop, and knight endings. Back in paperback, this classic chess study features new algebraic notation.”

It appears that the original edition of Practical Chess Endings was first published in West Germany in 1973, with an English translation by John Littlewood being published by Batsford in 1974. This new edition has been converted to algebraic notation and offers 879 diagrams, which is said to be more than five hundred extra diagrams compared to the original edition. However, none of the diagrams stipulate which side is on move. Thus, one cannot try to solve any given position based on the side to move. If the reader wished to do this, they would have to analyze from both sides and then continue reading.

Keres writes it is “difficult to overestimate the value of good endgame play and time spent on this department is amply repaid. The purpose of this book is to give the reader practical help in endgame technique.” He argues “there is much of interest in this phase of the game, and all chess players should strive to improve their play by mastering the necessary technique.” He notes that any error in endgame play can be decisive, and that this illustrates “the vital need to perfect one’s endgame technique.”

His aim is to provide an “indispensable ABC of chess usage” by presenting the reader with all basic endgame positions, along with the most important principles for correctly handling various endings that are of the most practical value. Keres writes “In order to pinpoint basic principles, I have decided to cut down on the number of examples but to examine them in greater detail than is customary. In this way I hope to make endgame theory a little more palatable… In offering this volume to the reader I hope not only to stimulate interest in the subject matter but principally to raise the average level of endgame technique among chess players everywhere.”

Keres uses studies to present much of the basic theory of the particular endgame under discussion and then turns to analyzing examples from practical play to reinforce the principles and highlight the proper methods to follow during play. Let’s look at a famous practical example from the section on rook endings:

Let us turn to a position containing many more pawns, which arose in the famous game J. Capablanca – S. Tartakower, New York 1924.

A very interesting situation, difficult to assess at first sight. White has two main advantages: Black’s king is cut off on the back rank and the g-pawn is a strong protected passed pawn. Black on the other hand is about to pick up some of White’s weak queenside pawns. It is a question of whose advantages are the most important.

A basic rule in rook endings, although to a slightly lesser extent than in queen endings, is to create a passed pawn as soon as possible. There are hundreds of examples of endings in which one side sacrifices a great deal of material in order to create a strong passed pawn and saves or even wins the game with it. Diagram 529 is an excellent example of such an ending.

However, whereas in queen endings a passed pawn can be pushed through with the help of the queen alone, in rook endings the king is usually required to give additional help. In fact, a passed pawn supported by the king and by a rook on the seventh rank restricting the enemy king to the back rank, is an extremely powerful weapon, often enough to win the game in itself.

In our example White’s rook is already on the seventh rank, but the support of the king is required. Only by following the above logic will the reader understand Capablanca’s brilliant winning plan:

The only way to win, combining attack and defence. On no account must he allow his king to be cut off by Black’s rook. For example the plausible continuation 1 Ke2 Rxc3 2 Rh6, winning Black’s f-pawn, fails to 2…Rc4 3 Rf6+ Kg7 4 Rxf5 (or 4 Ke3 c5) 4…Rxd4 which gives Black excellent counterchances.

Note how White heads straight for his goal, without wasting unnecessary time by playing 3 Rxc7.

Another important idea in such endings would be seen if Black played here 4…Rg4+. White would not capture the pawn (5 Kxf5? Rxd4) but would use it to protect his own king from the rear, winning at once by 5 Kf6!. The alternative 4…Rxd4 loses to 5 Kf6 Ke8 6 Rxc7 when White picks up more pawns before winning Black’s rook for the g-pawn.

White has now reached the ideal position he originally envisaged. Black’s king is in a mating net, and to avoid the worst he must eventually hand back more material than he has gained. A classic piece of endgame strategy!

Only now is this pawn captured; Black is positionally lost, the remainder being purely a matter of technique.

It is striking that most of Keres’ analysis stands the test of time, given that we can now subject simpler positions to endgame tablebase evaluations. In those instances where there may be a tablebase improvement, it usually doesn’t refute the analysis, but just shows a quicker method may be applied. For instance, the position from A. Alekhine – G. Stoltz, Salzburg 1942:

Practical Chess Endings is a classic of chess literature for good reason. The lucid discussions of the underlying aspects of the position drive home the point of the main ideas for the reader. The fundamental principles of the endgame are explained in such a way that one feels they can easily be extrapolated into one’s own play. Your endgame can only improve by working through this book.