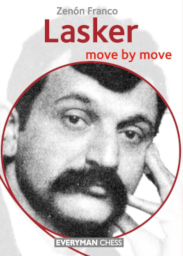 Zenon Franco is a Paraguayan grandmaster who is an experienced trainer and has authored numerous books on chess. He represented Paraguay on top board in seven Chess Olympiads, and won individual gold medals at Lucerne 1982 and Novi Sad 1990.

Here is how Lasker: Move by Move is described on the publishers website:

“Emanuel Lasker was world champion for a remarkable 27 years (1894-1921) and is generally regarded as having been way ahead of his time in his understanding of chess. He primarily regarded chess as a fight and considered that the strongest move in a position was the one that created greatest problems for the opponent and not necessarily the one that was objectively ‘best’. His strengths included:

“Lasker was, essentially, a complete chessplayer and his games feel thoroughly modern. Indeed many contemporary elite players (the most obvious one being the current world champion Magnus Carlsen) exhibit a very similar style. The Move by Move series provides an ideal format for the keen chessplayer to improve their game. While reading you are continually challenged to answer probing questions – a method that greatly encourages the learning and practising of vital skills just as much as the traditional assimilation of chess knowledge. Carefully selected questions and answers are designed to keep you actively involved and allow you to monitor your progress as you learn. This is an excellent way to study chess while providing the best possible chance to retain what has been learnt.”

The main content is divided by selected games as follows:

There is also a bibliography, preface, introduction, an index of openings, and an index of complete games. There are forty-six complete games and a range of opening systems represented, the most common of which is the Ruy Lopez and Queen’s Gambit. All of the games are wins for Lasker. He is on the white side of twenty-four of them. There are several game fragments and endings discussed as well.

There have been many books written on Lasker, seventeen are mentioned in the bibliography (a list Edward Winter describes as “desperately superficial”), with several quoted in the book. Franco writes, “As in my previous books in the Move by Move series, I shall give voice to the wisdom of other chess masters who have provided annotations, many very instructive, to Lasker’s games during the past one hundred years or more.” Yet, enjoyable as Lasker: Move by Move is, if you have some, or all, of these previous titles, you probably do not need this one.

All of these books share in common the authors wonder at the strength of Lasker’s play. Franco writes, “for more than a year there has scarcely been a day when I haven’t marvelled at [Lasker’s] strength. I found so much to admire: often it was how Lasker conducted the defence; at other times, it was for his handling of the endgame, or his astonishing ability to find tactical resources in defence, or the way in an inferior position he could create serious difficulties for the opponent, or provoke errors in balanced positions, or handle equal positions in such a way that he would keep accumulating small advantages with quiet manoeuvring, etc. In short, Lasker was a complete chessplayer.”

Soltis, in Why Lasker Matters, marvelled at Lasker’s ability to outplay an opponent from an even, seemingly drawn, position; while Franco opines “when Lasker stood worse … he had no equal in finding the best chances for resistance and counterattack.” He exposits that “one of the most important parts of Lasker’s legacy is that he demonstrates with his play that chess is a fight. Even in worse positions there are usually ways to fight and chances of putting up resistance, no matter what the engines say. That’s why in my annotations I try to convey the practical situation as well as the objective evaluation.”

Perhaps the reason why Lasker caused his opponents so many problems is illustrated with the following maneuver from Marshall-Lasker, New York 1907, where Franco gives Black’s move as 23…Rf7. This typographical error then keeps the black king at g8, making the later 24…Ke7 and 25…Rh6 truly astounding.

Exercise: What was the idea that Lasker had prepared?

“A fine, deeply calculated combination, which any grandmaster could be proud of even today. It’s beyond the powers of even a strong computer – here additional forces are needed…” (Kasparov).

It’s also much better than 17…Bd7 18 Qf3 Bc6, which was slightly better for Black. Regarding Lasker’s decision to sacrifice when he had a good alternative, Nunn commented: “To embark upon a sacrificial combination when there’s no choice is not especially brave, but to do so when you have a perfectly good positional alternative requires courage,” and he added, “Nevertheless, this is one of the keys to success in chess. If you genuinely believe that a particular continuation is best then you should have the self-confidence to play it even if it involves a degree of risk”.

Exercise: What had Lasker planned to play here?

Marvellous. This move unsurprisingly attracted great admiration and praise. It’s hard not to have the same reaction as upon seeing a move like 11…Na4!! in D.Byrne-R.Fischer, New York 1956, or 18 Rxf7!! in M.Botvinnik-L.Portisch, Monte Carlo 1968, or the sequence beginning with 24 Rxd4!! in G.Kasparov-V.Topalov, Wijk aan Zee 1999, to quote just a few examples of the highest expression of the art of chess.

Nunn wrote: “This is the difficult move to see. The threat to the a2-pawn forces White to take the impudent rook, exposing his king to a check along the b-file. However, the queen and bishop by themselves cannot press the attack home and the key factor is whether Black can include his remaining rook in the attack”.

“The point of the combination! This paradoxical rook sacrifice forces the white king to begin a fight for its own existence”, commented Kasparov, while Amos Burn called it “The finest combination ever played on a chess board”, while it’s noteworthy that Lasker commented simply, “This was the point”.

This capture reduces the tension in the position and makes Black’s task easier, since it activates the rook immediately.

After 19 e7 Lasker preferred 19…Re8 to the more active move 19…Rc8, because White could then exploit the fact that the rook was unprotected with 20 Qg4! and at the same time defend d4, enabling him to capture the rook on a3 under more favourable conditions.

As such, the only viable option for White would be to return some of the material with 20 Bb5!, although after 20…Qxb5+ 21 Ka1 fxe6 Black’s compensation for the exchange should be more than sufficient.

Exercise: How did Lasker continue?

“This is some kind of mysticism: the second rook is also sacrificed on the very same square! I think that Pillsbury must have been unable to believe his eyes…” (Kasparov).

“Later Lasker called this game the best of his career.

“Too many mistakes, you say? Please don’t rush to write off this game, and just remember its unique historical importance! That day Caissa chose Lasker, and as we know today, the chess goddess did not err. Her cruel decision marked a fork in the lives of both players.

“Lasker, inspired by this victory, won the tournament convincingly. Later that year he crushed Steinitz in a rematch and kept his title for 25 more years, while Pillsbury, after the above disaster, collapsed and lost five games out of the remaining eight, ending up third behind Steinitz. He never achieved the same peak of playing strength as in that magnificent year and died eight years later at the age of 34.

“Who know how often Harry Nelson Pillsbury remembered that traumatic day in St. Petersburg and the chances he had missed – chances that would have changed his entire life and the course of chess history” (Kasparov).

The cause of the collapse of the only 23-year-old Pillsbury in the second half was apparently that he had contracted syphilis, an illness which began to be curable only in 1908. He scored omly one and a half points from the final nine games, whereas Lasker continued playing at the same, very high level and scored 6/9.”

If you want to become acquainted with Lasker’s play, then Lasker: Move by Move is a suitable guide. The games are fantastic. The explanations are plentiful without overburdening the reader in variations. There are ample diagrams. The reader will come away with the same awe and respect as the author for Lasker’s strength and ingenuity. As Franco notes, “It has been a pleasure to ‘rediscover’ the second world champion, Emanuel Lasker, in this, the 150th anniversary of his birth. I hope that the reader will also share that emotion.”

The ebook works wonderfully in the free Everyman Chess Viewer app, and makes it convenient and easy to play through the games. The app comes with a built-in chess engine, but it will not let you enter sideline variations on your own. Chess Viewer eBooks are compatible with Apple and Android products, as well as with any PGN software. Each eBook comes with a ChessBase and PGN file that can be added to your device of choice.