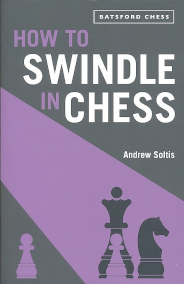 Popular chess writer International Grandmaster Andrew Soltis is chess correspondent for the New York Post and the author of many books, including What It Takes to Become a Chess Master, Pawn Structure Chess, and 365 Chess Master Lessons.

Here is how How to Swindle in Chess is described on the back cover:

“In chess, a swindle is a ruse by which a player in a losing position sets traps to exploit an opponent’s overconfidence, and thereby achieves a win or draw instead of the expected loss. Written by the hugely popular chess writer Andrew Soltis, How to Swindle in Chess tells you how to make your own luck in chess; how to choose the move that has the greatest chance of winning rather than the least chance of losing. Though widely ignored by virtually all chess books, swindling plays an integral role in deciding the fate of numerous games, and this invaluable book will help you improve your own game.”

It seems if you write a book about swindling in chess, the claim of it being a “virtually ignored” topic is obligatory. Nevertheless, there have been several books on the topic, including Chess Traps, Pitfalls, and Swindles, by I.A. Horowitz and Fred Reinfeld (1954), The Fine Art of Swindling, by Ali Mortazavi (1996), The Complete Chess Swindler by David Smerdon (2020), or even How to be Lucky in Chess by David Lemoir (2001).

The Oxford Companion to Chess characterizes a swindle as “a trap by means of which a player who has a lost position avoids defeat.” And refers to Marshall as “the most renowned of swindlers.” In Chess Thinking Pandolfini defines a swindle as “a deceptive trap that, if the opponent falls for it, wins or draws an otherwise lost game.”

For Soltis, “The would-be swindler chooses moves that do more than just resist. He defends actively, often by setting traps. The more primitive the trap, the more an unexpected result seems lucky.” However, he notes “One mistake rarely decides a game. What is typical is a series of mutual errors. This is what a would-be swindler has to expect – and exploit.” He writes, “a good swindler knows that often the less forcing move has greater chance of inducing an error because it gives the opponent more choice.”

Soltis guides the reader through the positions in detail. He shows how the winning side is winning and, at each critical moment, the correct line of play going forward, and the slow slide into swindle that often results when the winning side loses concentration or gets confused in complications. For Mortazavi, Emanuel Lasker is the preeminent swindler. For Soltis, it is Frank Marshall. Soltis writes, “Frank Marshall didn’t invent swindling. But he made it his trademark, even naming the first collection of his games ‘Marshall’s Chess Swindles’.” Yet, the proper title of Marshall’s book is Marshall’s Chess “Swindles”.

Of this collection of games, Marshall wrote “The title of ‘swindle’ is one of derision, which has been applied to my victories over certain disappointed gentlemen, who did not enjoy seeing their fond per-conceived notions demolished over the open board. When their theories went to smash in actual play with a man not tied to book chess, the explanation was, that the unexpected move was a ‘Marshall swindle’. So I have made a collection of ‘Marshall swindles.’” For Marshall, chess was “a contest of mind with mind and of will with will.”

Soltis expounds, “What Marshall appreciated better than his contemporaries is that in bad positions there are fundamentally different criteria for choosing moves. The standards that we usually trust to point us towards the most successful moves often do not apply.”

Here is one example from the book:

For this book Soltis introduces the use of the tilde symbol to represent moves that offer the best practical chances. He writes, “Chess can be a game of swift and fatal changes. Positions are turned from losing to winning in a move or two. You can deplore the changes as unfair. They often are. But if you want to live in the real world of chess luck you need to take advantage of it. That is what this book is all about.” There are also twenty-nine quiz positions interspersed throughout the chapters.

In the chapter “The Very Lucky,” Soltis credits “Among the greatest swindlers are Judith Polgar, Emanuel Lasker and Magnus Carlsen.” It is a well-known adage that chess is tactics, tactics, tactics. And Soltis confirms that when he writes “A swindler lives and dies with tactics,” and “It should be no surprise that a swindle is fueled by tactics,” and that “Tactics trump principles in any swindle attempt.” He sites the game Vachier-Lagrave – Wang Hao, Wijk aan Zee 2011 as an example of when “A successful swindle is most dramatic when it is brought about by a single surprise move.”

“White spent most of the last ten moves giving check to prevent the advance of Black’s pawns. The checks run out after 53.Qe3+ Kb7.

“Before resigning Aron Nimzovich played 53 Qd4+. It’s the kind of move you might expect from a beginner.

“But Black had spent the last several moves looking for safe squares for his king. He might have moved quickly and overlooked 53…Qxd4!.

“He didn’t. He played it and White resigned.

“Some players would consider 53 Qd4+ unbecoming of a master. But when the alternative is resigning, nothing is unbecoming in Swindle-think. There was simply no better move.”

For Soltis, the basic principle of Swindle-think is “In lost positions, forget about finding the objectively ‘best’ move. Look instead for the one most likely to succeed against a human.” He outlines three basic ways to maximize your chances of a successful swindle:

(a) Identify your best tactical resources,
(b) Give your opponent choices, and
(c) Confuse him.

Chess is a fight and that’s why swindles are so memorable. Decades later I still feel the elation from my two most memorable swindles in which I secured victory from defeat, and I still vividly recall a game in which my opponent did it to me. How to Swindle in Chess is the kind of book I appreciate the most at the moment. It is full of interesting positions, it can be read for pure enjoyment, and there are enough diagrams provided that it can mostly be read without a board.