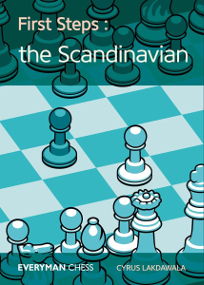 Cyrus Lakdawala is an International Master, a former National Open and American Open Champion, and a six-time State Champion. He has been teaching chess for more than thirty years, and is said to coach some of the top junior players in the U.S. He is a prolific author for Everyman Chess, having penned at least twenty-seven titles to date.

Here is how First Steps: The Scandinavian is described on the back cover:

“The Scandinavian (also known as the Centre Counter Defence) occurs when Black meets White’s 1 e4 with 1…d5, immediately countering in the centre. White invariably continues with 2 exd5 when Black can choose between two systems, both of which are covered in this book. Firstly 2…Qxd5, which regains the pawn immediately but exposes the black queen early on – a feature that complicates the play for both players. Secondly 2…Nf6, which invites White to risk attempting to hold onto the d5-pawn. If White goes down this path then a complex tactical struggle can easily develop.

“First Steps is a new opening series and is ideal for improving players who want simple and straightforward explanations. First Steps emphasizes:

“the basic principles
the basic strategies
the key tricks and traps

“First Steps books are based around carefully selected instructive games which demonstrate exactly what both sides are trying to achieve. There is enough theory to enable the improving player to get to grips with the opening without feeling overwhelmed. If you want to take up a new opening, First Steps is the ideal place to start.”

Of the thirty-nine complete games in the book, sixteen are from the author. Lakdawala notes that he has been playing the Scandinavian for more than thirty years, and that the vast majority of his miniature wins (in under twenty moves) come from the Scandinavian. However, he cautions that “it’s a long learning curve to master the Scandinavian.”

Let’s look at an excerpt from the introduction that is indicative of Lakdawala’s style of writing:

“It may feel crazy even to consider the …Qxd5 Scandinavian lines, since on her second move Black’s insane queen goes swooping up, as if she were Daenerys Targaryen, Breaker of Chains, Mother of Dragons, riding Drogon (that’s the largest of her three dragons, with black and red markings) into battle. When we play 2…Qxd5 the laws of physics begin to break down. After all, how can bringing out our queen as the first piece developed be sound? If a clinical psychotic were to see such a move, his or her first thought would be: “That’s crazy!” The natural corollary of 2…Qxd5 is that we as Black – already a move down – fall further behind in development. You may ask, “What logical end are you striving to reach?” Why should we play a line with such an unwanted, inherited by-product? Starting the game down in development with Black is not some species-specific issue, since most openings have us behind in development as Black. It’s just that the …Qxd5 Scandi flaunts it. My answer is to dismiss your concerns about the line’s soundness credentials. …”

“So which category does Scandinavian fit in? The answer is both. There are incredibly sharp lines in the …Qa5/…Bg4 Scandinavians, which are nothing more than tactical, homework/comp battles between the two sides, like the following position in the following diagram:

“The above position is a realm of no second chances, since if we mess up we become the startled sinner on Judgment Day, unprepared for the Almighty’s righteous wrath. In this position, Black must be booked up on 9 Bc4, which places our queen in great peril; 9 h4, intending to go after our bishop with 10 h5; and also the 9 Bg2 line, threatening our b7-pawn. If you aren’t comped up here, you are as good as dead with the black pieces. I take to quiet strategic lines as a narcotic to a terminally ill patient in chronic pain. Your writer is bred for abstract logic, rather than the blood and gore of tactics and calculation. So how do I get away with playing this crazy line? The reason I score well is that this line is heavily comped. I have been playing it for three and a half decades and holding my own, even versus GMs, since they play my computer, not me. The Scandinavian is the movie martial arts master who makes the apprentice sweep the floor and mow the lawn for months (in our case years!) before he is willing to teach the disciple. It’s a long learning curve to master the Scandinavian, but I assure you, it’s well worth the wait, because once you understand it, you will wield it as a terrible weapon. It’s a difficult opening to learn and we can’t treat it as the shoe-store clerk who decides to change careers by studying YouTube videos on surgery, and then applies for the newly opened post of head of neurosurgery at the local hospital.”

If you find this sort of twaddle appealing, then have at it. For me, the time spent reading the author’s self-indulgent drivel is completely wasted.