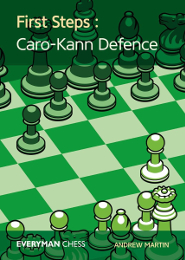 Andrew Martin is a FIDE Senior Trainer and International Master. He is the current head of the newly-formed ECF Academy, which provides elite training for strong, young players. He teaches in twelve schools, is an experienced chess writer and has produced numerous chess DVDs (including some on the Caro-Kann; He also used to manage the Caro-Kann theory section of Chesspublishing.com).

As described on the back cover:

“The Caro-Kann Defence arises after the moves 1.e4 c6. With this first move Black (as is also the case with the French Defence – 1.e4 e6) plans 2…d5, establishing a well-protected central pawn. The Caro-Kann has a reputation as a rock solid defence that minimises the risk of Black being subjected to undue early pressure. Rather than inviting the opponent to engage in in immediate warfare, Black focuses on completing development comfortably and postponing [sic] the serious battle until the middlegame. It is notable that the White systems which try to batter the Caro-Kann into early submission are highly double-edged and often rebound badly.”

The Caro-Kann Defence can be both solid and strategically rich. Much the same can be said of First Steps by Andrew Martin; it is a well-written opening book, yet perhaps more conventional than exceptional. Still, it is a solid work with a lot of diverse content and positions, and a great introduction to the Caro-Kann for any improving player.

The book contains 87 annotated complete games featuring the Caro-Kann, either directly or key positions by transposition. Most of the games showcase a modern handling of the opening, with more than half (approximately 60) of the games selected are from this century, and a majority of those (about 40) being played in the past two years. The actual number of complete games present in the book is probably closer to or exceeding 100, since some complete games are given in the notes to certain moves.

By way of covering these games, this book is essentially an annotated tour of all the major and minor variations in the opening and the middlegame positions they lead to – nothing more, nothing less. I was pleasantly surprised to find coverage of a variation used recently (after publication of the book) in the 10th round game between Abrahamyan and Paikidze from the 2018 US Women’s Championship: 1.e4 c6 2.d4 d5 3.Nc3 b5?! – the aforementioned game was the first time I’d seen this eccentric move, although it has been played before and Martin features the line by using a Tal game from 1968. In case you are wondering, Black has not hung the b-pawn, and will answer 4.exd5 with 4…b4.

In addition to a note about the author, a brief introduction, and the ever-helpful index of variations and games, the content is organized as follows:

The Strategic Ideas chapter is a great introduction to the main themes of the opening and features representative lines for each of the chapters to follow. In the annotations to this section, Martin provides very straightforward and easy to follow explanations of the major strategic ideas, without overwhelming the reader with many variations. Take as an example the excerpt from this chapter, the game Lu Shanglei vs. S. Mamedyarov, from the World Blitz Championship, Doha 2016:

The next game is a slight affair, coming as it does from the 2016 World Blitz Championship. It nevertheless offers a further glimpse of the type of light-square control that Black can establish in the Caro-Kann right out of the opening.

This is the Two Knights Variation. Black is now happy to cede the two bishops in order to develop freely and quickly.

More annotations and explanations continue. This game, along with several others, also feature a call-out or highlighted box with an observation (elsewhere just a tip). This is seen later in this same game (after 9…Qa5)

Black’s pawn on c6 and e6 form what is known as the small centre. They not only control important central squares, but also act to restrain White from attacking directly. White has two bishops, but Black has no problem pieces and can take aim at the d4-pawn.

OBSERVATION: Small centre positions have to be handled carefully by the defender. They tend to towards passivity.

The latter sections of the book contain much more dense annotations, but ones that are still often easier to follow when compared to the maze of variations sometimes found in other works. Sometimes the annotations appear imposing, but only because Martin is giving another entire complete game with variations in the notes (not a significant problem, but I would have preferred these games be given their own section). Most pages contain at least one diagram to aid those who are trying to follow the main text and moves without sight of the board. A great example of the above is found in Martin’s coverage of F.Gheorghiu – V.Hort, Alekhine Memorial, Moscow 1971:

A good move, originally played by Petrosian. Black avoids any endgames where his pawn gets pinned down on g7 and he can develop counterplay by placing a rook on g8.

Older top-class games are always worth playing through

TIP: Do not neglect the classics

The f4-square can often be a focal point for Black in this main line. Always be on the lookout to see if you can use this square to gain counterplay.

Not that interest, except to show that the teeth of 11.Rh4 can be drawn.

Much of the rest of the book is similar to these two excerpts in terms of number, breadth, and style of annotations. Occasionally, Martin pauses for a move and lists the typical plans and positional assets for one or both sides. He is fairly objective about the chances for both White and Black, presenting both draws, and wins for each side. Here is one final example, an excerpt from the game L. Portisch vs. R. Wade, Palma de Mallorca 1966, the first game covered in the Panov-Botvinnik chapter:

Let’s start by taking a look at 5…g6, which if it works, is definitely the move Black wants to play. He deploys his dark-squared bishop as actively as possible and hopes to attack the d4-pawn in due course. He can continue with …0-0, maybe …d5xc4, and then Nbd7-c6, blockading d5. If White just sits there and plays standard developing moves, then this plan works extremely well. The problem arises after 6.Qb3!

Since 6…dxc4 7.Bxc4 gives White a strong attack, Black is obliged to sacrifice a pawn.

An important position. Can Black get his pawn back or not? Is the extra pawn, doubled and isolated in the centre, useful to White anyway?

Well, yes, the pawn is extremely useful because it is inhibiting Black’s development and so we come to the main struggle in this line. If Black does not get the pawn back soon he will end up in trouble. We start with a game from a while back, where Portisch, a world-class grandmaster, plays a rather unusual move, but one that poses a threat to the black set-up.

This book focuses more on fostering an understanding of Caro-Kann middlegames, rather than memorizing opening variations. Still, there are some sharp lines in this opening which must be known. Unfortunately, the few games that reach the Caro-Kann by transposition do not give the standard move order in the notes (Such as the above Portisch game, which transposes first to the 2.c4 before becoming a Panov-Botvinnik attach. The standard move order would be 1.e4 c6 2.d4 d5 3.exd5 cxd5 4.c4 Nf6 5.Nc3 g6). This is a minor issue, but one that might leave readers sometimes wondering how they will obtain the position in question in their own games. In addition, a more consistent effort of referencing other games in the collection would have been helpful. Interesting alternative moves highlighted in one game are actually covered elsewhere, but to find this a brief look at the index of variations is necessary. Again, this is a minor inconvenience that does not significantly detract from the book.

I enjoyed working through the games in this book and have even started playing the defense in blitz chess. I think this book is a great choice for anybody looking to pick up this opening, especially improving players between 1600-2200. The Caro-Kann is sound and reliable (sometimes passive), but the positions are not always balanced or slow-paced. The dynamic, strategically rich, and varied positions that arise from this opening are a great proving ground for learning about pawn structures and positional chess. Martin’s book indeed can be your first steps towards mastering these positions.