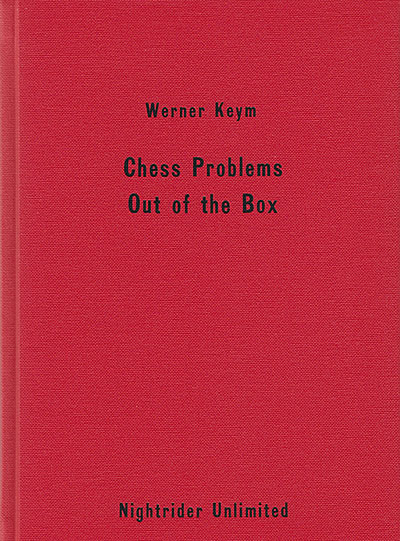 Werner Keym is a German expert in chess problems showing castling, en passant capture, and pawn promotion. For years problem-lovers have enjoyed his computer-defying puzzles, his funny chess jokes, and his stories in the tradition of Sam Loyd.

Here is how Chess Problems Out of the Box is described on the back cover of the paperback edition:

“Here is a stupendous anthology of 500 extraordinary chess problems to broaden your chess horizons and exhaust your grey matter. Some problems appear ordinary, but most are tricky and insidious. Many require researching the ‘history’ of the position (retrograde analysis). Dive into a fascinating, sometimes even bizarre world of subtle or spectacular chess surprises. There is even a suggestion for a better procedure in the Chess World Championship Match”

The complete contents are divided as follows:

This first English edition is a considerably revised and updated edition of Keym’s 2010 German publication Eigenartige Schachprobleme. New to the 2018 edition are 125 problems. Keym writes, “In about half of the 500 problems, retrograde analysis plays a minor or major role. There are two reasons for this approach. For one thing, I prefer to solve and compose retros. On the other hand, my proposal led to a change in rules on the mutual dependency of castlings and en-passant captures, thus ending a decades-long controversy. Such problems (as no. 360) are a very interesting specialty of chess composition and an enrichment compared to the chess game in which only one of these possibilities can be realized.”

For Keym, as described in the preface, “this is a very personal book about exotic regions of the fascinating world of chess composition. They are not about fairy pieces and conditions, but rather about castlings, en-passant captures, pawn promotions, tasks, unconventional first moves, retro puzzles, text problems (with mathematical aspects), retractors, proof games, records, special stipulations and more. Such problems are entertaining, exciting, stimulating, witty, funny – and often even computer-defying. Ideally, they are ‘beautiful’, that is perfect in idea and form (such as no. 9 and 345).”

*16.1 references the Codex for Chess Composition in which it is stated “Castling convention. Castling is permitted unless it can be proven that it is not permissible.”

Of note, not all examples are represented by a diagram. Some are just depicted in writing with a description of piece placement. For instance, as in the following excerpt from the section on castling:

Keym notes, “In order to enable enjoyable reading and solving, both the diagram and the solution are on the same page.” There is a frontispiece photo with Keym at the board with the following position:

He writes, “In 2002, on the occasion of my 60th birthday, this problem (along with my photo see p. ii) was published in the newspaper Rhein-Zeitung Koblenz. 223 of 237 entries were incorrect (1.Rb6!?).” The key to the problem is that it must be Black’s move!

Chess Problems Out of the Box is the first book of chess problems that I have encountered in which nearly every problem presented is of interest. It is a joy to dip into this book again and again and discover these gems of chess composition. As the publisher notes, “Most of all these brain-twisters are not only beautiful and original, but also subtle, enigmatic or tricky, sometimes even bizarre, in any case a challenge to the solver.” Thus, the book is suitable for all levels of problem aficionados from beginners to experts in the genre. Be sure to get your copy before they are gone.