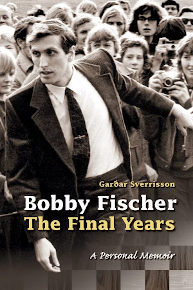 Gardar Sverrisson holds degrees in political science and economics from the University of Iceland and an MFA in creative writing and literature from the University of Arizona. His writings include several short stories, a novel, and two biographies. His biography of Leifur Muller was translated into German and adapted for the stage in two countries. Sverrisson was a board member of the Icelandic Human Rights Centre and president of the National Coalition of People with Disabilities in Iceland. In 2004 he was part of the group that pressed for Bobby Fischer to be released from detention in Japan and granted asylum in Iceland.

Here is how Bobby Fischer: The Final Years is described on the back cover:

“This extraordinary book describes the last years of the great legend and World Chess Champion, Bobby Fischer. It is written by his close friend and confidant, the Icelandic author Gardar Sverrisson who was instrumental in procuring Fischer asylum in Iceland in 2004. For the remaining years of his life, Fischer resided in Reykjavik. He was in daily contact with Sverrisson who gradually became the only friend he would trust.

“Here the real story of Fischer’s final years is told for the first time. Beautifully written, the book gives a unique insight into Fischer’s personality. We encounter a passionate and complex man, a sincere and generous friend, a bookworm and a nature lover, who is both contemplative and witty when reflecting on his turbulent life, his controversial principles, exceptional career and many historic chess champions.”

The book was first published in Icelandic in 2015 under the title Yfir farinn veg með Bobby Fischer. Perhaps this is the reason for an ISBN discrepancy. On the title page inside the number is given as 9789935211774, while the back cover offers 9789935211811.

The story begins with Fischer’s realease from detention in Japan and the machinations of obtaining Icelandic citizenship, including a letter written by Fischer to Iceland’s parliament. Sverrisson writes that Fischer “was disappointed to have to write a special letter in supplication to parliament instead of being able to trust the Foreign Ministry to translate words into action. Over the phone, he read me a draft of the letter, which strayed somewhat from the core points I had encouraged him to keep to. When he had the final version faxed to me, it still contained criticism of both the US and Japanese governments, neither of which he felt it possible to omit.” He encouraged Fischer to reach out to Amnesty International for assistance, but notes Fischer considered Amnesty as “far too politically correct and influenced by powerful groups he had criticized, for instance, Jews.” And that “Amnesty International would never help a man with opinions such as his own.” These glimpses of Fischer’s mania, while ever-present, mostly remain in the background though.

Subtitled A Personal Memoir the book is more a story of Fischer’s friendship with Sverrisson and his family, whose household was a second home to Fischer. It includes personal moments that offer insight into what it was like to be Fischer’s friend and confidant. Fischer vacationed with the Sverrisson’s, moved into the same apartment building as them, and often slept on their couch. They had lengthy talks, midnight walks, traded books, and shared the experiences related in broad detail in the book. Sverrisson mentions how Fischer loved being out in nature and had a certain affinity with animals.

Chess bibliophiles will appreciate the discussion of which chess books Fischer finds most worthwhile and which books about himself he found of interest. Fischer had a poor opinion of Eric Schiller’s Learn from Bobby Fischer’s Greatest Games and Sverrisson writes “he was most disappointed to find repeated there an utterly false story claiming that Reuben Fine had showed him a potentially game-saving improvement for Max Euwe after a game the latter lost against Bobby. This was pure fantasy, as was the persistent story that Jack Collins had been his teacher.” This latter disputed fact came as a surprise to me.

There is even a possible ChessCafe.com connection with the book. Sverrisson relates that while he and Fischer were reasearching the games of Alexander Alekhine on the internet “we found a fragment, a few minutes long, from a British radio interview with Alekhine. We were both surprised at how high and even shrill his voice was. Each of us had assumed that this risk-taking attacker, who moreover had a reputation for a hot temper and drunkenness, must have had a deeper and more masculine voice. But there we were disappointed. Then we amused ourselves with our own disappointment that Alekhine’s voice should not have been deeper than the recording suggested.” This interview and audio is still available in the ChessCafe.com Skittles Room archives.

Bobby Fischer: The Final Years closes with Fischer’s death in 2008. It was left to Sverrisson to try to diagnose Fischer’s ailment, as he refused to seek medical attention out of the adamant belief that modern medicine impinged on the natural cycle of life. At first Sverrisson thought it was diabetes, but there was one symptom that remained an outlier: that of a persistent backache. In the end, Fischer eschewed any kind of advanced treatment for kidney failure. He did accept some simple interventions for comfort’s sake when the pain was unbearable. Still, a remarkable feat to hold fast to this belief even while on one’s deathbed. And much like J.R.R. Tolkien’s The Hobbit where defeating the dragon is not the end of the story, the book ends with Sverrisson’s account of the great pressures and difficulties he faced in making funeral arrangments in accordance with Fischer’s wishes, rather than succumb to the circus that many others wished to make of the moment for their own private interests or gain.

My impression from Bobby Fischer: The Final Years is that Fischer had a child-like psyche and his interactions with the Sverrisson’s seems like that of child to parent in many respects. Nevertheless, this look behind the scenes, as it were, is fascinating reading. The book gives us a glimpse of the human side of Fischer. Not the ranting lunatic spouting conspiracy theories, but the sincere soul and generous friend with a wide range of interests with whom we enjoy spending time. Cheers to Gardar Sverrisson for bringing this to our attention.