Fighting Chess with the Great Dane

I love history, and of course I love chess history even more. However, chess history is made by different characters from various periods of time. Some players are legends because they are beyond the standards of their time, like Fischer, and some are minor characters in this cosmic drama we call life.

Bent Larsen was a world class player who lived in a golden era where professional chess players were few, mainly starving, and sacrificed aspects of their lives for the love of Caissa. At a time when Russian players enjoyed limited financial reward, fame, and the love of the masses, those in the West experienced hardships at making a living. This is one of the first sentiments we grasp from this book. Larsen had the chance to have a good life – to become an engineer – instead he choose to become a chess player, in a time when chess did not remunerate its professionals well. 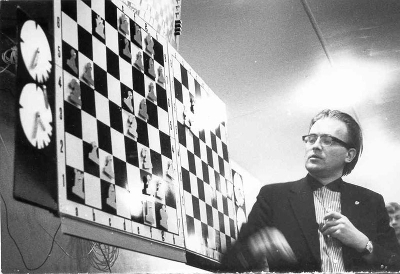 Just to better understand the world in which Larsen and Fischer lived, we need to say that young players in the former Soviet Union were “nurtured”; they had trainers, coaches, training tournaments, seconds (since in that time games were adjourned, and a player needed a second to analyze through the night), and so on. Fischer and Larsen did not have any of this; they lived on meager tournament prizes, simul displays, and the articles they wrote.

This edition is a translation of the Spanish volumes Todas las Piezas Atacan, Volumes 1 & 2 (“All the Pieces Attack”), though it leaves out the material from those volumes that were about other players and includes only Larsen’s own games. Regarding which, Larsen never thought these were his “best” games. In fact, the games he commented were compiled from a variety of sources, and they were mainly called “selected games” or “difficult decisions” because Larsen believed the term “best games” was too relative, since it means something different for every player.

That said, however, it is also nearly identical to the English version of Larsen’s Selected Games of Chess 1948-69, McKay 1970.

For instance, here is the final paragraph from the introduction to Larsen’s Selected Games of Chess:

“We sometimes meet the foolish question: ‘Is chess an art?’ Well, probably it is, at least sometimes. But the word ‘art’ is often misused. You may compare a book such as this one to an artist’s showing with pleasure some of his best paintings to a guest, but to complete this comparison I must add that in the notes, in the variations of the analysis, his basic attitude must still be impartial, scientific.”

And here is the final paragraph from the introduction to Bent Larsen’s Best Games:

“Sometimes people pose an ingenuous question: ‘is chess an art?’ Well, it probably is, up to a point, but the word ‘art’ is so often misused. The reader can compare the author of a book such as this to an artist who is pleased to show some of his best paintings to a guest; but, for the comparison to be complete, you would have to add that in commentaries – that is to say, analytical variations – one’s basic attitude has to be impartial and scientific.”

The same fifty games from Larsen’s Selected Games are here as well with one extra game included from that period: Gligoric-Larsen, Palma de Mallorca 1967. In Bent Larsen’s Best Games there are 124 games commented by Larsen, with four others given in the introduction. The introduction is a reprint of an article that first appeared in New In Chess magazine 2010/4, written by three different authors. As with the introduction excerpt above, the notes to the games are similar to those in Larsen’s Selected Games, while the remainder of the games are culled from sources, such as magazine articles and later writings.

One aspect that I appreciate is that the commentary is mostly textual, with variations only when needed. I like this format, because I dislike following long variations. Bent Larsen’s Best Games is divided into thirty-nine chapters, most of which cover important high level tournaments. The tournament crosstables are also included, and this is welcome because it give us a context in which to see how Larsen performed in a particular tournament, and against what opposition. Another nice feature is the many photos of Larsen from different periods of his life interspersed throughout the book. 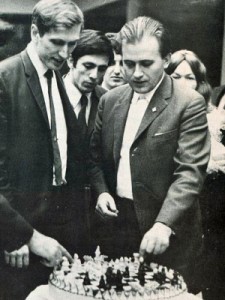 I have long wanted to have a collection of Larsen’s games in algebraic notation. Unfortunately, the previous books were all in descriptive. Larsen’s writing style is very pleasant, and accessible to the widest range of players. The openings are varied, and, of course, there is a wide range of middlegame ideas and tactics. One thing in need of correction though, is that on page thirty-five the game vs. Olafsson, see below, is mistakenly given as a Grünfeld Indian Defense, rather than as a Sicilian Najdorf.

Larsen was truly a cosmopolitan character. He lived everywhere, and toward the middle of his life he moved to Argentina because of his second wife. He shares many nice anecdotes, and compelling insights. For example, Larsen describes how Bronstein lost against him, and how that loss signified the moment when Bronstein was unable to compete at the top level for becoming one of the world champion contenders. It illustrates just how hard a sport chess really is, and how much psychology is part of the game, especially at the top level.

I’d like to present few games from the book, that I particularly enjoyed. For Larsen’s superb annotations, please refer to the book. Just these few games we see that Larsen was able to play many different openings, and skilfully handle a variety of strategical themes, such as how to exploit a space advantage, or an attack on the kingside, or how to totally paralyze the opponent.

My assessment of this book:

The Joys of Chess