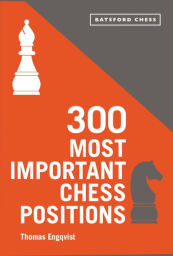 Thomas Engqvist is an international master from Sweden, who has been a chess coach and teacher for more than thirty years. He has worked with players at world championship level in both junior and correspondence chess.

Here is how 300 Most Important Chess Positions is described on the publishers website (as of this writing):

“These are positions every chess player must know, presented by an international grandmaster and expert teacher. This strategy-packed book offers 50 openings; 150 middle-game positions, arranged by theme; and 100 endgame positions that cover everything from pawn and knight to bishop and queen. An introduction explains the importance of these positions and the ideas they represent.”

However, as noted in the introduction, while the original quota was 50 openings, 150 middlegames and 100 endgames, “one important change in the present book is that there are now 150 positions representing the endgame and the same number for the opening and the middlegame combined.” One reason for this change is that Engqvist considers the endgame the most important phase of the game, because it is easier to see how the chess pieces cooperate and one can then apply this knowledge backward to the opening and the middlegame. He writes, “another reason for stressing the value of the endgame is that multi-piece endings need greater coverage since this type of ending is more or less ignored in chess literature.”

Part 1: 150 Most Important Positions in the Opening and the Middlegame

Part 2: 150 Most Important Positions in the Ending

The material originated as an email course aimed at Swedish juniors. Engqvist writes that he wanted to “distill the most important positional ideas and techniques” with solutions presented in a “pedagogical and easy-to-learn fashion in order to facilitate comprehension.” He suggests that there are several important ideas to be learned from any one key position, and these ideas or techniques can then be applied in many other situations.

The recommendation is to study five positions each week and then repeat them a week later and work on five more. Endgvist notes that it is vital to repeat the positions from time to time to see if you can instantly remember the ideas. He writes, “If you follow such a schedule ambitiously it will take you approximately one year to assimilate the knowledge to be gained from the positions and utilise all this for a lifetime. The key is to learn slowly to give you time to reflect on the positions.”

The examples are taken from the full range of chess history, including past greats, modern stars, unknowns, chess studies, and Enqvist’s own play. The book would benefit from a theme index, but unfortunately one is not provided. Let’s look at position #125 from the section Pawn-Play and the Centre:

When this strong move was played by Capablanca it was initially regarded as a mistake by both critics and onlookers. The main reason was that it reduced Black’s influence on the d4 square and therefore made the advance of the d5 pawn more difficult. Also the d5-pawn itself had became weaker. However, Capablanca realised the value of the move and described it in detail in My Chess Career.

White’s general plan was to put pressure on the hanging pawns with his rooks on c1 and d1 and Black would defend the pawns correspondingly by placing his rooks on d8 and c8. The e7-bishop defended the c5-pawn. Capablanca asked himself if it was possible to activate Black’s position and that is how he found 15…c4.

The important point of Capablanca’s revolutionary move is that the e7-bishop becomes an active piece. Another important point is that the b2-pawn becomes a tactical weakness which Black can attack along the b-file. A third important issue is that if White blockades the d5-pawn by placing his knight on d4 the attack on the d-file is temporarily stopped.

In addition to these arguments Nimzowitsch wrote in his classic My System that 15…c4 makes the hanging pawns relatively secure because after this move Black has only one weakness instead of two.

Capablanca recommended 16.e4 to simplify the game but Bernstein preferred to put pressure on the centre, since it was regarded as a good policy, and played for a win.

This is one of the points of Black’s 15th move. Black plans an exchange on c3.

Black’s d5-pawn has now been transformed to a passer so his overall strategy has certainly been successful.

A very important game to memorise since it illuminates several ideas regarding how to play with hanging pawns. These ideas are important to know whether you are White or Black.

When we see Bernsein-Capablanca, it is invariably with regard to the stunning denouement, but here its about the pawns. This itself is an interesting distinction. Though it would have been nice if Enqvist had quoted Capablanca in full at move fifteen. Here is what Capablanca said:

“White’s plan from the start was to work against the combined weakness of the two center pawns, as they had to be defended by pieces. In the general strategic position of the pieces White’s two Rooks would occupy the open lines, while Black’s Rooks would be behind the two pawns defending them. Again, the awkward position of the Bishop at e7 rendered it useless, except for the purpose of defending the pawn at c5. It is against such sound strategy on the part of White that the text move is directed. By it the defensive Bishop becomes an attacking piece, since the long diagonal is open to him, and what is more important the b-pawn is fixed and weakened and becomes a source of worry to White, who has to defend it also with pieces, and thus cannot use them to attack the Black pawns. The fact that the text move opens d4 for one of White’s Knights is of small consequence, since by posting a Knight there the attack on the d-pawn is blocked for the moment, and thus Black has the time to assume the offensive.”

300 Most Important Chess Positions is a book that can last a lifetime. The reader can return to it continuously to refresh their understanding of key positions and sharpen their practical playing skills. As Engqvist says, “you need to integrate the positions into your conscious chess thinking.” He recommends to play out the positions with a friend or a computer from both sides of the chessboard, and he even provides contact information for feedback for future works. Highly recommended.