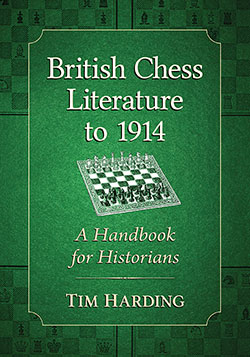 Tim Harding is a well-known writer on many aspects of chess and chess history. He is the former editor of Chess Mail magazine and he contributed the monthly “The Kibitzer” articles for almost twenty years here at ChessCafe.com. He is a senior international master of correspondence chess. He lives in Dublin, Ireland and represented Ireland at the 1984 FIDE chess Olympiad in Thessaloniki.

Here is how British Chess Literature to 1914 is described on the back cover:

“A huge amount was published about chess in the United Kingdom before the First World War. The growing popularity of chess in Victorian Britain was reflected in an increasingly competitive market of books and periodicals aimed at players from beginner to expert. The author combines new information about the early history of the game with advice for researchers into chess history and traces the further development of chess literature well into the 20th century.

“Topics include today’s leading chess libraries and the use of digitized chess texts and research on the Web. Special attention is given to the columns that appeared in newspapers (national and provincial) and magazines from 1813 onwards. These articles, usually weekly, provide a wealth of information on early chess, much of which is not to be found elsewhere. The lengthy first appendix, an A to Z of almost 600 chess columns, constitutes a detailed research aid. Other appendices include corrections and supplements to standard works of reference on chess.”

The first four chapters cover chess columns in newspapers and periodicals. The next two deal with chess magazines, and the penultimate chapter delves into chess books. Subtitled A Handbook for Historians, British Chess Literature to 1914 offers fifty photos, six appendices, detailed notes, a bibliography, and a complete index. However, there are only eighteen games in the entire book. So very little actual chess. Harding is not sampling the contents of early publications and presenting them anew in an updated format. He is delving into the history of the publications themselves: when they were printed, who were the editors, etc.

For instance, Harding traces how conducting an article in the New Court Gazette in 1840 gave Howard Staunton “a taste for editorship” when he then became editor of The British Miscellany in 1841. This in turn was the precursor to The Chess Player’s Chronicle, which in its heyday in the 1840s and 1850s was arguably the most important chess magazine in the world. Harding devotes an entire chapter to the Chronicle, which he describes as a publication with successive incarnations that shared the word “Chronicle” in common. These publications ran from 1841 to 1902, of which no complete set is available.

Harding devotes a chapter to other short-lived chess magazines and corrects the historical record of who edited the early volumes of The Chess Player’s Magazine. In the appendices he also includes corrections and supplements to standard reference works such as The Oxford Companion to Chess and Gaige’s Chess Personalia. In the forty-four page annotated bibliographical appendix, listing all known chess columns from Britain and Ireland published from 1811 to 1914, Harding offers many additions and corrections to Whyld’s reference work Chess Columns: A List.

His final chapter, On Doing Chess History Today, presents Harding’s “personal observations on the objects and methods of chess history” with advice for anyone thinking of embarking on such a project, including specific advice on how to get the most out of visits to the British Library and the Bodleian Library in Oxford. He notes that there is no “right way” of doing chess history, but that it is a prevalent mistake to consider that the recording and analyzing of results are the central task of the historian. He also cautions to “not expect to make any significant money” from your project, and that the prospective author will probable spend more money on doing research than they will receive in return. As well, he takes aim at authors who self-produce inferior publications and provides cautions of the pitfalls to avoid when engaged in a project.

British Chess Literature to 1914 is designed for a very specific and narrow segment of the chess playing populace. If you are among that segment, this book is a must. Otherwise, for a more general work, readers could consider Harding’s mammoth biography Joseph Henry Blackburne, which is once again available, but may soon be out of print. At 582 pages, Blackburne is the first comprehensive biography of Britain’s greatest chess player of the 19th and early 20th centuries. It presents more than 1,000 of Blackburne’s games, including all his surviving games from serious competition, annotated in varying detail. Blackburne’s unusual family and social background are also fully explored.