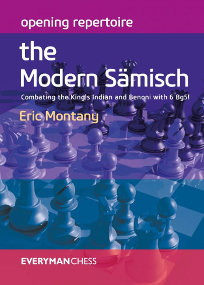 Eric Montany is a USCF National Master and has twice won the state championship of Colorado. He studied physics and engineering and is currently a science teacher and chess club advisor at The Harker School in San Jose, CA, whose students won the 2016 Team National High School Chess Championship. The Modern Sämisch is his first book. Here is how it is described on the back cover:

“The Sämisch variation is a powerful method to counter the popular King’s Indian Defence. The key move is the advance f2-f3, consolidating White’s central space advantage and limiting Black’s options for counterplay. In the traditional Sämisch White develops the queen’s bishop on e3 but in the modern version, as explored in this book, the move Bg5 is preferred. This creates further problems for Black as the natural King’s Indian counter … e7-e5 allows White a potentially strong pin against the f6-knight, while chasing the bishop with … h6 and … g5 creates kingside weaknesses.”

The author credits Joe Gallagher’s 1996 book, The Sämisch King’s Indian, as inspiration for taking up the opening, and he refers to it frequently during the text with regard to its influence on his repertoire. Montany considers the games of Sadler and Dreev as “the most instructive” and includes four games from each, while also including four from his own oeuvre. Two of Montany’s games are wins against the same opponent, one of which decided the Colorado State Championship, where his opponent prepared in advance with recommendations from Bologan.

GM Matthew Sadler contributes the foreword where he calls the Sämisch the cornerstone of his anti-King’s Indian repertoire. Sadler in turn credits Gulko as an inspiration, but only one game from Gulko is in the book. With regard to the book, Sadler writes

“Two themes in the Modern Benoni structures typical of this opening have won me a lot of points over the years, and it’s good to see these well-represented in this book:

Both ideas can set difficult problems for the unprepared Black player. In particular, the shift from f2-f3 (solidly protecting the e4 pawn and negating Black counterplay against the centre) to an aggressive central strategy with f3-f4 often catches Black players unaware in practical play.”

Let’s look at an excerpt featuring Sadler on the white side of a 24-move win:

Black’s best response to the rook move, simply protecting the c6-knight so that the b-pawn can advance.

Combined with 9 Rc1, the text is the idea that has caused Black the most problems. White prophylactically protects c4 after moving his rook off of the long diagonal. He is essentially saying that because of his space advantage he can play more useful moves than Black can before forcing the play. Once Black plays a slow move or misplaces one of his pieces, the d4-d5 push will come with more strength than it would have if played on move 9.

This is excellent in theory and has worked well in practice, but it takes good judgement to know which moves are useful and which are not. Playing over the games in this chapter and paying careful attention to when certain piece arrangements work and when they do not should help you to time the push correctly.

Black tires of waiting and strikes in the centre, but White has a nice rejoinder. The best move, 10…b5, will be analyzed in the next game.

b) Sämisch hero Matthew Sadler lost twice following 12…c5 13 Bd3 b5 14 0-0 e6 15 dxe6, once to Mark Hebden in 1988 and once to Michael Hennigan in 1995, though his position out of the opening was for preference in both games. I’m sure he kicked himself after the second loss, however, because after the following correspondence game he never got a third try: 15 e5! dxe5 16 Nce4!.

White exposes the sham that is Black’s position for the price of a pawn. His pieces control all of the important central squares while both of Black’s bishops are passive, one of his knights is out of play on a7, the other is caught in a pin on the kingside, he’s weak down the d-file, and the c5-pawn is hanging.

Montany describes the Sämisch as a “faithful companion,” and writes that his “love for its dynamic h-file attacks, sacrificial pawn thrusts, boa constrictor grips, and suffocating space advantages compels me to share everything that I’ve learned with you, dear reader. Perhaps I will one day remember myself modestly as an expert on the opening. And because I don’t know whether my memory can be entirely trusted, I wrote everything down.” The prospective reader will be glad he did.

It is a specious argument that only grandmasters or international masters are worthy of authoring opening books. Occasionally, as is the case here, a lower-rated author will focus on details and explanations that would not occur to someone further removed from his target audience by way of rating, and the book becomes accessible to a wider audience as a result.

The Modern Sämisch is mostly geared towards competitive, highly-ranked players. Yet given that Montany spends ten pages explaining the first six moves at the outset of the book, as well as taking time to explain the underlying themes of the positions at hand throughout the book, The Modern Sämisch becomes accessible to players of any level. Though, of course, the lower down the spectrum you are, the harder you will have to work.

As with any work on an opening from Everyman, I recommend buying the ebook because it is available as a PGN file. This can then be used as a foundation for a repertoire database that you can build based on your own experiences and analysis. To my knowledge Everyman is the only publisher that does this, and it makes them the go-to choice for ebooks.