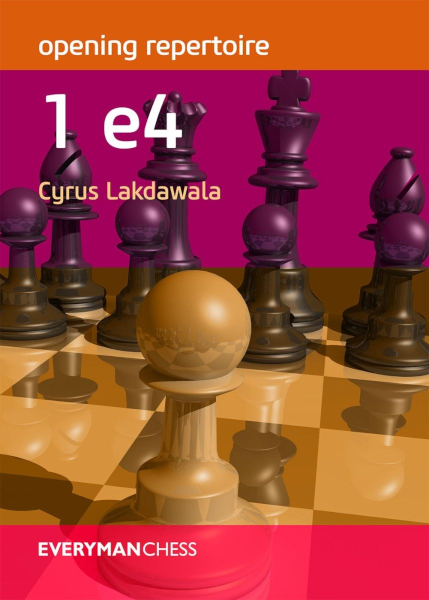 Cyrus Lakdawala is an International Master with numerous open and state championships alongside other accolades. Lakdawala probably needs little introduction as an author to any seasoned reader of chess literature. He is a prolific and sometimes polarizing writer in the chess world, authoring more than two dozen books – some of which featuring the very lines this book is meant to face (Caro-Kann, Alekhine, etc).

The back cover has a straightforward and, as it turns out, mostly accurate description of the book:

“The suggested variations for Whites are ones that rely far more on a generic understanding of strategic ideas rather than the memorization of reams of opening theory…. The variations are chosen so that White can gain space whenever possible… if you want to develop your repertoire with 1.e4 then this is the book for you. Everything you need to know to open 1.e4 with confidence.”

This book features 55 complete games in the chosen lines all stemming from 1.e4 (or by transposition for a few of the games). Of these, 20 are from the past 5 years, feature games by elite players. This includes Caruana and Carlsen handling the White pieces in 7 games, and 4 games by the author himself. The games are all annotated, but not too heavily, with citations appended to variations covered. The coverage of the lines is organized as follows:

Lakdawala is the archetype of a chess writer with a recognizable style, his books are often peppered with colorful and sometimes exaggerated metaphors and cultural references. I have found this at times helpful (serving as a memorable image or memory marker), but in some of his books the references are so frequent and obtuse that it makes for an unenjoyable read. Thankfully, in this book he seems to keep these tendencies in check and balances the poetic prose with more pragmatic analysis and straightforward chess advice.

Covering an entire repertoire for 1.e4 can be a daunting task, but Lakdawala does a fairly good job at providing the variations and concepts needed for at least a basic understanding of the opening. Although some complex lines are featured (such as the Frankenstein-Dracula variation, one of my favorites), the ideas and rationale behind these choices are made clear. Often this is done with call-out boxes in which a question that a reader might ask is posed, which Lakdawala promptly and clearly answer. A nice example of this is the following excerpt from game 12, Caruana vs Radjabov, 2016 – which features the same opening, 1.e4 c5 2.Nf3 Nc6 3.Bb5 g6, as played in game 1 in the Caruana vs. Carlsen match.

Question: Is it wise to trade on c6 without provocation?

Answer: By doing so White inflicts some structural damage on Black in return for handing over the bishop pair. It is a popular strategy in the Rossolimo and my personal preference here over either 4.O-O or 4.c3.

This is Black’s most common recapture by about a 2:1 ratio

Question: Isn’t it a violation of principle to capture away from the center?

Answer: It kind of is, but I would remind you that Black does this routinely in the normal Exchange Ruy Lopez, in order to free the c8-bishop. Next game we look at 4…bxc6.

White can play 5.h3 first to prevent …Bg4, but I’m not all that panic-stricken by that move. Then 5…Bg7 6.d3 will transpose below.

After 5…Bg4 6.Nbd2 Bg7 7.h3 Bxf3 8.Nxf3, Black has freed his position, at the cost of returning the key asset of the bishop pair. I prefer White here, since we keep our structural edge and give up nothing for it.

The queen tiptoes back into the house as quietly as the guilty wife who “worked late”, having in reality just returned from a romp in the sack with a co-worker assistant 30 years her junior.

Exercise (critical decision): Should Black accept the bishop sacrifice or back down with 20…Qb6?

It is worth noting that in the above excerpt, I did not show Lakdawala’s numerous annotations for moves 1-17, but did leave in the somewhat overused exclamation marks and emphasis on the principle as in the book. This excerpt also gives an uninitiated reader a taste for Lakdawala’s colorful, if not somewhat confusing, metaphors.

I have been a fairly consistent 1.e4 player myself, although I usually opt for variations that are more open, dynamic, and risky than those suggested by Lakdawala in this book. Of the parts that overlapped with my existing repertoire, I was generally pleased and in agreement with the recommended lines (his assessment of the Frankenstein-Dracula variation, for example). I mostly enjoyed reading the book, picking up a few new ideas for lines I haven’t tried often. Other parts of the book, such as the sharp and in-depth coverage in the Scandinavian Defence, were even more useful. Overall, however, it seems that players in the 1500-1900 range (for reference, I am about 2050) that are looking for an accessible guide to these openings, rather than a truly deep theoretical work, would benefit most from this book.